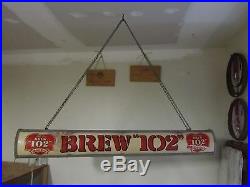 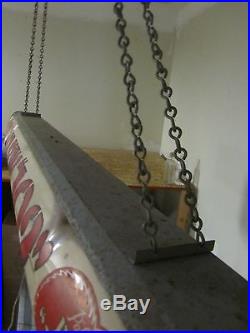 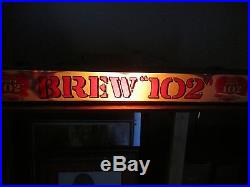 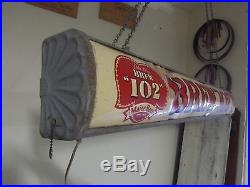 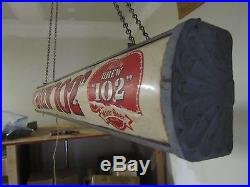 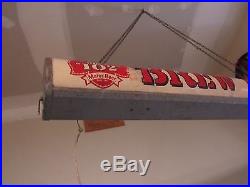 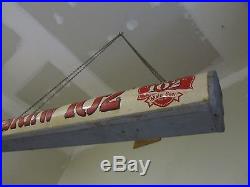 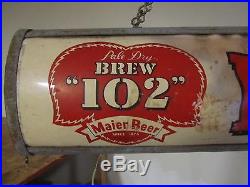 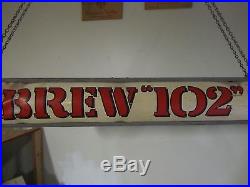 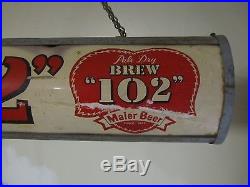 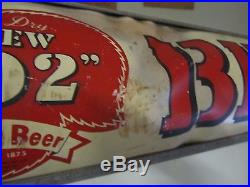 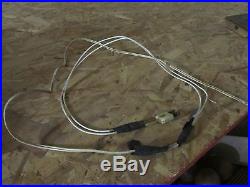 Offering this very rare Maier Beer Pale Dry Brew 102 lighted sign. The sign has flaws, as you can see, but overall it has perfect patina and still lights up. Own a piece of early Los Angeles Breweriana – The Pale Dry “102” was around from the late 1940’s to 1972 – this sign is believed to be from the 1950’s. Dimensions of the sign approximately 48″ long x 6.5″ wide x 4.5 deep. The sign appears to be all original with no signs of any restoration. The metal on/off chain is working as well. Some interesting history I was able to find online: Maier and Eastside both struggled during Prohibition. Like many American breweries, they survived the dry spell by producing soft drinks and “near beer”beer that squeaked under the 0.5% alcohol by volume (ABV) limit imposed by the Volstead Act. Some breweries supplemented their legal activities with illicit brewing. On March 30, 1932, federal agents raided the Maier Brewery and discovered what they called “unshakeable evidence” that the facility had been producing full strength, 4% ABV beer. Prohibition officers arrested Maier’s sales manager and one of his employees. Maier denied knowledge of the illicit brew, but authorities seized the brewing equipment and bottling plant. Maier would not regain control of his business from a court-appointed receiver until 1940, seven years after Prohibition ended. For Maier’s rival, the end of Prohibition was a happier time. A full repeal of Prohibition came less than a year later with the ratification of the Twenty-first Amendment. Both breweries prospered through the Second World War and in the years immediately after. Upon the advice of advertising executives, the Maier Brewing Company rebranded its original pale lager as Brew 102advertisements suggested that the brewery had tried 101 unsuccessful recipes before settling on the “new” brewand positioned it as a cheap beer for the working class. The marketing strategy worked. With demand surging, Maier replaced its old, brick brewery with a new, industrial complex. Eventually, intense postwar competition with Anheuser-Busch and other national brewers led to the L. Pabst, in a race with other national brewers to expand first to the West Coast, opened a new plant next door to the old Eastside brewery and began making its Pabst Blue Ribbon lager in 1953. Rival brewers Anheuser-Busch and Schlitz both followed in 1954 by opening large industrial breweries in Van Nuys. Under new ownership, the brewery located atop the historic Indian village continued to make Brew 102 until 1972, when the plant closed. Although it was finally demolished in 1985 for the construction of the El Monte Busway, its mammoth footprint is still evident in the sudden curve that northbound motorists negotiate on the 101 freeway just before Alameda Street. The item “Vintage BREW 102 Lighted Can Sign Maier Brewing Los Angeles Not Neon Beer WORKS” is in sale since Monday, February 20, 2017. This item is in the category “Collectibles\Breweriana, Beer\Signs & Tins\Other Beer Signs & Tins”. The seller is “ricketyswank2″ and is located in Fallbrook, California. This item can be shipped to United States, to Canada, to United Kingdom, DK, RO, SK, BG, CZ, FI, HU, LV, LT, MT, EE, to Australia, GR, PT, CY, SI, to Japan, to China, SE, KR, ID, to Taiwan, TH, to Belgium, to France, to Hong Kong, to Ireland, to Netherlands, PL, to Spain, to Italy, to Germany, to Austria, RU, IL, to Mexico, to New Zealand, PH, SG, to Switzerland, NO, UA, AE, QA, KW, BH, HR, MY, CL, CO, CR, PA, TT, GT, HN, JM, AG, AW, BZ, DM, GD, KN, LC, MS, TC, BB, BD, BM, BN, BO, EC, EG, GF, GG, GI, GP, IS, JE, JO, KH, KY, LI, LK, LU, MC, MO, MQ, MV, NI, OM, PK, PY, RE.